The U.K. may well be triggering article 50 today (starting the process whereby the UK leaves the European Union) but within Europe the sport of Bodysurfing is in the process of doing the opposite, coming together rather than moving apart. 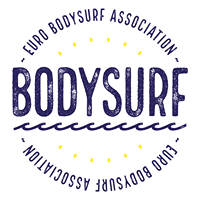 Led by Bodysurfing France, there will soon be a bodysurfing association for Europe. Thanks largely to their efforts the Euro Bodysurf Association has been created, which is dedicated solely to bodysurfing. Their intention – to raise the profile of bodysurfing across Europe and beyond.

The Euro Bodysurf Association has been created specifically to bring bodysurfers from across Europe together, and will have its own constitution (including rules and regulations). Indeed, they have already set up a series of 3 bodysurfing events for 2017!

The UK Bodysurfing Association C.I.C. have stated that they are fully behind the formation of this European association, and are set to become one of the founder members.

This year there are events already planned for Portugal, France and Morocco, with an event in the UK possibly being added into the series in 2018.

The first event of 2017 is the Peniche Pro, which will take place at Praia de Supertubos, Peniche, Portugal, over the weekend of 15-16th April. Registrations are now open for anyone who wishes to apply.

The second event in the 3 event series is the Bodysurf France event, taking place at Anglet, SW France. This will be held over either the 3-4th or 10-11th of June.

A third event is scheduled to take place later at Mehdya, Morocco, in November, dates yet to be announced.